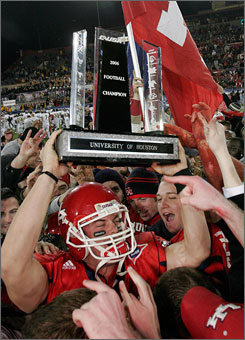 The Eagles have signed quarterback Kevin Kolb to a four-year deal.  He is Philadelphia’s eighth and final player to be drafted and signed by the team from this year’s draft.  Kolb was taken by the Eagles in the second round with the 36th overall pick.  The Houston product connected on 292-of-432 attempts last season for 3,809 yards and 30 scores while being picked off only four times.  During his senior year, he ranked fifth in the nation with a 162.72 pass efficiency rating and sixth in passing yards.  As a starter in 2003, he was named the Conference USA Freshman of the Year.