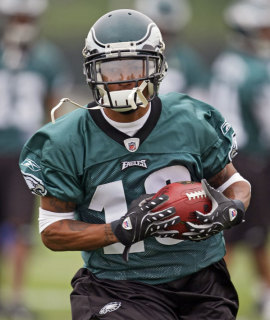 Certain rookies are able to make an immediate impact on a team, others have to develop and grow into their roles on a team. The 2008 rookie class may produce the most productive 1st year players in some time for the Eagles.

Desean Jackson, was a stand out in one of my earlier articles for his performance in camp, and he has continued to impress in the Preseason. One thing I noticed when I had the chance to meet him in person at the Eagles Carnival, he has very big hands for his size. That may play into why even though undersized, he has been catching everything thrown his way. {Minus a couple drops in the rain vs Carolina, which the whole WR corp was guilty of}. Trevor Laws has shown a knack for making plays as well. He was constantly in the backfield, and is playing thru some injuries. Once healthy, I’m expecting him to be a force in the middle of the line.

Quinten Demps has the ballhawk skills to succeed in the secondary, but his return ability in kickoffs is what might get him on the field in his rookie season. The coaching staff has already decided to give him a good look during the New England game, and after Booker’s performance last week, it might be Demps job to lose. Other notable rookies are LB J. Mays “The Head Buster” & OT King Dunlap. Mays is already running with the 2nd team at MLB, while Dunlap actually has received some time with the ones during camp. He seems to be a lock to make the team which says a lot about the late round pick who seems to be handling the left tackle position better then Justice, a 2nd rounder, who has since been moved to right tackle and might struggle to make the roster.

What We Know After 2 Games
OLD ANDY Versus NEW ANDY