Reid Likely to Get Extension 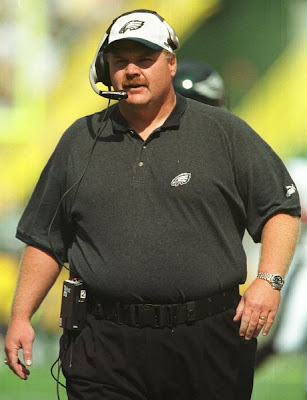 Let’s imagine, if you will, that you own the Philadelphia Eagles. Let’s also imagine that your head coach is one Andy Reid. Let’s also throw in the fact that he is in the next-to-final year of his contract. Common sense tells you to re-up Reid in a reasonable amount of time, right?

That seems to be the mindset of the Eagles’ braintrust as during an interview with Larry Kane on the local Comcast Network, team president Joe Banner said that he expects Philadelphia to re-sign Reid to a contract extension before it expires after next season.

And truth be told, it would make perfect sense to re-up Reid at this juncture. After all, despite not having a Super Bowl ring, he has accumulated a 99-63-1 record in 11 seasons – which qualifies as upper-echelon the last time I checked. Only the New England Patriots’ Billl Belichick and Tennessee Titans’ Jeff Fisher have more wins among active coaches; coincidentally or not, Fisher and Reid have been with their current teams their entire head coaching career.

The way things look at the moment, unless something of monumental proportions happens to the Eagles and/or Reid, expect to see him roaming the sidelines in 2011 and beyond.