Five Reasons Why the Eagles are Doomed for Sunday Night

I hate to say it, but I just don’t have a good feeling about this game. It just seems like everything adds up against the Eagles. Do I want the Eagles to win on Sunday? Absolutely. However, this is the first game of the year that I wasn’t confident that the Eagles were going to win.

Here are five reasons why I think the Eagles will be doomed on Sunday:

1. They’re traveling west
The good news is that the game isn’t until 8:00 on the east coast. However, the Eagles don’t always travel well when heading to the opposite coast. Last year, they had to go to Oakland and San Diego and returned from both games with a loss.

2. The 49ers are 0-4
The 49ers haven’t won a game yet this year, but they are much, much better then their record indicates. Although they played two pretty bad games, they had two games that they lost on the final drive. Not only that, but it was to Atlanta and New Orleans, two very good teams.

Their division is so bad that they could still have a chance at the playoffs despite the hole they’ve dug for themselves. In order to do that, they must win this game.

3. Their coach is a maniac
Mike Singletary may or may not be out of his mind. The guy is an absolute nut. I’m sure the post game locker room speeches he’s been giving are far from pleasant. If you play for the 49ers, the last thing you want to do after a loss is get an earful from Singletary.

You have to believe that Singletary is really trying to get his guys fired up for this game too. If they move to 0-5, they can kiss the season good bye completely. It’s holding on to a thread right now, but they still have a chance at redemption.

4. The Redskins gave them a blueprint
Our offense was completely shut down last week against the Redskins. They chose to not send any blitzes. Rather, they send four rushers and dropped everyone else back into coverage, forcing the Eagles to make only short completions.

Kevin Kolb will be back at the helm, and the 49ers will look to force Kolb into the same situations he saw last week. Kolb won’t be able to check down to the elusive LeSean McCoy this week who made a lot of plays for him. McCoy will miss the game with a rib injury.

This is there first of four Sunday Night Football games on the year, so hopefully this is just a hoax. 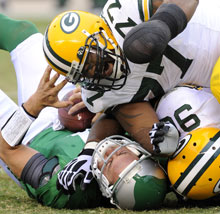 Based on How It Stands Right Now, the Eagles are Favored in Eight Games in 2020