Going into the match-up with the 49ers, the Eagles knew that they had to come home with a win in order to keep pace with the rest of the NFC East. Both the Redskins and Giants improved to 3-2 earlier in the day, so the Eagles had to pick up a win to follow suit. They were able to do so, but there were plenty of ups and downs along the way.

Offense
All eyes were on quarterback Kevin Kolb on Sunday, and he did a very nice job. After his defense put him in a 7-0 hole before he even got his hands on the ball, Kolb took command of the offense on the first drive and led the team down the field. The drive was capped off by a Brent Celek touchdown which included a great effort on Kolb’s behalf to avoid defenders, and Celek’s behalf to muscle his way into the end zone.

Kolb played well for the majority of the game, spreading the ball around to all his receivers and throwing with the accuracy we expected out of him. The only play of concern was a fumble that the 49ers recovered in Eagles territory. However, the Eagles got lucky and Joe Nedney missed a field goal shortly after the turnover.

LeSean McCoy played like an absolute stud, showing no signs of his rib injury. He looked as shifty and elusive as ever and showed no lack of speed when he got his hands on the ball. You have to respect him for playing with the injury, but it’s even more amazing that he played at such a high level.

Despite a strong first half, the offense failed to score a touchdown in the second half. There were some definite issues on Andy Reid’s play calling end, but at the end of the day I was pretty happy with how the offense played.

Defense
For the second week in a row, the Eagles defense allowed the opposition to score a touchdown on their opening drive. This isn’t a statistic you like to have, and they have to do a better job earlier in games.

After the opening score, the defense did tighten up and played fairly well through the middle of the game before starting to melt down in the fourth quarter.

On the ground, the defense held Frank Gore to 52 yards on 18 carries which is definitely something I can live with. I was fearful that Gore would be able to do whatever he wanted against the Eagles, but they did a good job on him for the most part.

Asante Samuel’s absence was clearly felt as Michael Crabtree had a huge game. On the night, Crabtree recorded nine receptions for 105 yards and a touchdown. It seemed that every time Alex Smith threw to him, there was no one around.

Vernon Davis was able to join Crabtree in recording a game with over 100 receiving yards. He did so on only five receptions, and like Crabtree, recorded a touchdown. I knew going into this game that Davis was capable of having a big game, and he didn’t disappoint.

Although they had a very spotty performance, the team did force five turnovers. Quintin Mikell had two fumble recoveries, and was able to return one of them for his first career touchdown. Ernie Sims recorded a fumble recovery, and Dimitri Patterson had a nice interception. Although the defense seemed kind of soft in the fourth quarter, they stepped up on the 49ers final possession and the game was sealed on a Trevard Lindley interception.

Special Teams
Our special teams units looked down right pitiful on the night. The Eagles got a lot of praise for bringing in Bobby April to take over their special teams, but it doesn’t seem like it’s doing too much good right now. Their coverage units are getting torn up and really need a lot of improvement.

Injuries
Does it ever end? The amount of injuries this team is suffering this year has to be some type of record or something. Jason Peters, Brodrick Bunkley, and Trent Cole all left the game against the 49ers. Cole returned to the game but the status of the other two seem to be up in the air right now.

We also saw Brent Celek leave the game after taking a shot to the head and DeSean Jackson also left the game which made Chad Hall the Eagles third receiver for the time being.

Injuries have been incredibly frustrating this year to say the least, and I hope the trend stops sometime soon.

Looking Forward
The Eagles will return home this week as the Atlanta Falcons come to town. It’s still early, bu Michael Vick may be back to start against his former team. The Eagles played in Atlanta last year, and Vick was able to do some big things against the Falcons. 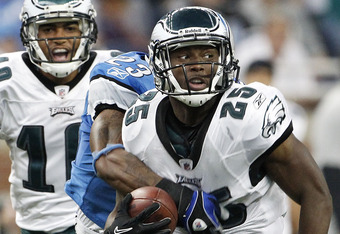 Based on How It Stands Right Now, the Eagles are Favored in Eight Games in 2020

Eagles Able to Escape From San Francisco With Ugly 27-24 Win
Are the Falcons Better or Worse Then Their Record Indicates?